the county office of Worcester County, Massachusetts, in the United States

Worcester or Worcester is a city in central Massachusetts, the United States. It is located about 70km in the west suburb of Boston, at the western end of the Metropolitan Area of Boston. For this reason, the city has both a commercial and industrial city and a suburban city. The population is 172,648 (Population census of 2000). According to an estimate made in 2005, the number increased to 175,898. Until the county government was abolished in 1998, it was the county office of Worcester County. It is the second largest city in the state after Boston, and the population of urban areas is 93.5 million in the 2010 census (included in the Boston-Worcester-Providence Metropolitan Area).

Worcester downtown. On the right is the city hall.

The central Massachusetts is a relatively high-population area in the state. However, like many cities in the northern part of the United States, even Worcester has been promoting the use of a shopping center in the vicinity, and this is a process of promoting the sprawl.

Worcester also has the character of an academic city in which several universities, including Holly Cross University of the Catholic prestigious Liberal Arts College, Clark University, a private university within 100th place in the United States, and Worcester Institute of Technology, occupy the campus.

Odd Fellows Home, a representative historical building of Worcester. It is designated as a national historic site.

It was in 1673 that the settlement started in Worcester. It became a formal village in 1684. In 1722, it was promoted to a town. When Worcester County was established in 1731, Worcester became the location of the county office. In July 1776, the Declaration of Independence was read in Worcester for the first time in Massachusetts.

John Adams was at a Worcester school for a while. After retiring, Adams returned to his home Braintree (now Quincy City) and became a lawyer.

In 1848, Worcester was promoted to the city. After that, Elm Park was established as a municipal park in 1854, and the development of Worcester's city progressed.

In 1953, Worcester was seen in a large tornado. The tornado that destroyed most of the city killed 94 people. The number of deaths caused by tornado was the largest in New England history. Among the facilities destroyed by the tornado were the campus of the then Assumption College. Today, the campus of Asuncion University has been relocated and it has been taken over by the Quinsigamond Community College.

The Blackstone River once flowed through Worcester City. However, the river was culvert, and now only traces of it can be seen in the Water Street and the river flowing south of the city.

The city is surrounded by the following seven hills, giving the impression of Rome.

Lake Quinsigamond is located at the east end of the city. Boat competitions are often held in this lake. 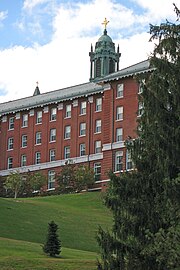 The Boston Metropolitan Area is known for its large population of universities, including Harvard University and Massachusetts Institute of Technology, but Worcester is no exception.

The College of the Holly Cross is a traditional Catholic liberal arts college established in 1843 and is one of the top 25 regular students in the United States. They are affiliated with Sophia University in Japan, and each year the students selected are sent to each other as foreign students. Clark University is a medium-sized private university, and this is one of the top 100 schools in the United States. Worcester Polytechnic Institute is a college specialized in science and engineering. The university also has the Massachusetts Academy of Mathematics and Science, which provides intelligent science and engineering education for high school students. Kotaro SHIMOMURA, who led the development of Japanese chemical industry from the Meiji period to the Taisho period, was a graduate of this Worcester Institute of Technology.

The following universities also have a campus in Worcester.

Many of these universities are affiliated with the College of Worcester Consortium, which has established a system of cooperation, including the exchange of credits, shuttle bus service between universities and the sharing of research materials.

Dodge Park, one of the many parks in Worcester.

Worcester has more than 5,000,000m2 parks in the city. The Elm Park was purchased in 1854 as a city-owned land and was developed as a park in the design of Frederick Law Olmstead. The park was designated a national historic site along with the 32,000m2 Worcester Common, which was set up in 1669. The Burnside Fountain is located on the south side of Worcester Common. Because the fountain looks like a statue on which a boy rides a turtle, it is called the Turtle-Boy Love State locally. In 1903, the Green House donated 2,200,000m2 of the land that the Green Hill had, to the city, and the Green Hill Park, the largest park in the city, was built. In June 2002, the state and the city decided to install the Vietnam Veterans Memorial Monument in the Green Hill Park.

The station building at Union Station, a stop at Worcester Station, was constructed in the Renaissance style, and the restoration was completed in 2000. In addition to the suburban train and long-distance train terminals and various restaurants, the Franklin Roosevelt American Heritage Center Museum (Franklin D. Roosevelt American Heritage Center Museum).

The Mechanics Hall is located as a hall for acting arts. The DCU Center is a city's convention center and has an arena attached to it for various events. The local ice hockey team, Worcester Sharks, is based in the DCU Center.

The airport that will be the gateway to Worcester is Logan International Airport in Boston. Although there is also Worcester Regional Airport, since US Airways withdrew from the airport in February 2003, there has been no passenger flights to the airport, and only private and commercial aircraft are taking off and landing. In September 2005, Aregiant Air, a Las Vegas-based company, announced a flight plan to connect Worcester and Florida. On December 22 of the same year, a flight between Worcester and Orlando Sanford International Airport, the hub airport of the company, was launched in a test marketing stage.

Amtrack and Worcester Union station of the Massachusetts Bay Transportation Authority (MTA) are in Washington Square 2. The night long-distance train, Lake Shore Limited Express, which connects Chicago and New York and Boston, makes one round trip a day (at this station, trains that arrive at and depart from Boston).

In addition to Amtrak, Worcester Union Station is the terminal of the Fleming Ham-Worcester Line, a commuter railway operated by the Massachusetts Bay Transportation Bureau (MTA).

The city's transportation system is covered by a bus operated by the Worcester Regional Transportation Bureau (RTA). RTA also operates a shuttle bus that connects universities with Worcester Consortium.

An interstate expressway, I-90, runs east to west in the south of the city. The I-90 is a trunk line that crosses the continent and is one of the expressways that extends radially from downtown within the Boston metropolitan area. I-290, a branch line of I-90, runs through Worcester City. Boston is about 70km east and 50 minutes summary. I-190 extends north from Worcester and diverts from I-290 north of downtown. The I-290 extends further south from the junction with I-90 as I-395 to New London in Connecticut (about 117km, 70 minutes). In the western suburb of Worcester, I-84 diverges from I-90 and reaches Hartford (about 102km, about an hour). From New York it is about 285km, and it is about 3 hours and 20 minutes.

The following is demographic data from the 2000 census.

Households and family (number of households)